Despite the fact that wasps can be very abundant and extremely bothersome at times, there are in fact only four different species that make our life a misery: Two species of Paper wasps – the Tasmanian Paper wasp, and the Chinese Paper wasp – and two species of Vespula wasps - The German wasp and Common wasp.

The Paper wasps can be easily recognized by their long, thin body, smoky-coloured wings, and dangling legs in flight. Tasmanian Paper wasps are a two-tone brown colour, whereas Chinese Paper wasps are predominantly black with very thin yellow transverse abdominal stripes. A Paper wasp nest is a small Paper Mache structure – a bit like an upside-down umbrella with cells on the underside – which usually hangs from timber or branches; the adult wasps can be found on the underside of the nest and will sting when the nest is disturbed. A stinging attack can be painful and usually involves a number of wasps from one nest.

A paper wasp nest is easily dealt with: Remember that the wasps are only active during daylight hours and will quietly sit in and on the nest at night. That is the time to strike: Spray the nest with a good blast of BV2 spray which will result in a total kill of all resident wasps. 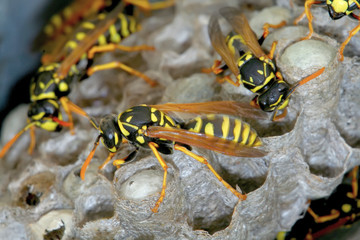 German and Common wasps are not so much larger, but more robust than the Paper wasps: relatively shorter legs and wing, and fatter bodies, which are conspicuously striped with black and yellow. It is often difficult to tell the difference between the two species. Ironically, the German wasp, Vespula germanica, became accidentally introduced into New Zealand during the Second World War. The Common wasp, Vespula vulgaris, is a more recent arrival to our country.

Both species have a tendency to nest in cavities, either natural hollow areas such as decaying tree trunks, or in wall, roof, or floor cavities of buildings. In most cases, however the wasps excavate themselves a nest site in clay soils during the spring and summer months.

The Life-cycle is remarkable:


Overwintering fertilized Queen wasps create themselves a small nest in spring, to quickly raise some brood. This offspring will then help their mother (Queen) to extend the nest and gather food for the next batch of brood; the Queen will from now on only concern herself with egg-laying. The wasp colony grows very fast, with thousands of workers (sterile female wasps) gathering food, excavating soil and extending the nest. Nest excavation is often evident in the form of hundreds of small clay pellets being dropped from the air onto decks, cars, bay windows etc. In order to soften the clay, wasps will drink water en masse from a nearby swimming pool, which is then regurgitated over the to-be-excavated clay.

The greatest activity in and around a Vespula nest occurs from late summer into autumn. Numbers have built up, and workers are gathering food (usually protein-rich food such as insects) from the territory, which can be a kilometer in diameter. In autumn the food preference switches to high energy Carbohydrates, such as sweet substances (Soft drinks, sugars and honey). Drones (Fertile male wasps) are being raised in the nest, as well as a good number of prospective Queens. They mate and the fertile Queens will leave the nests at the onset of winter in an attempt to find a suitable place to hibernate, and the whole cycle starts all over again. More often than not the nest will die out, but in some cases the nest can survive (mild) winter, and will grow even bigger through the winter and following spring and summer: Nests with a couple of million cells are known to have been built this way. These nests can measure a few metres in length.


Most nests in soil, retaining walls, or in building cavities have only one main entrance through which the wasps can be seen flying in and out during day-light hours. Activity generally ceases after dark, when it gets colder in the evening hours – Be aware of the fact that on warm balmy evenings wasps can still keep on flying in the light of the moon! When the exact location of the wasp nest entrance is established through day-time observations, it is relatively easy to find the entrance with the aid of a torch at night.

NB. Do not shine your torch directly at the nest as the guard wasps will follow the torch beam!!

Carefully deposit the PERMEX INSECT DUST in the main entrance of the nest and move away as quickly as possible. The wasps on guard near the entrance of the nest will get alarmed and run through the dust, distributing it further. Often a distinct buzzing after treatment indicates that the powder is irritating the inhabitants. Remember that the disturbed wasps will often fly straight towards the torch at night.

When the treatment has been successful wasp activity around the nest will cease after a day or two.
If this does not occur try again at a later date, bearing in mind that there may be other entrances to the same nest; all these entrances should ideally be treated with PERMEX INSECT DUST.


PERMEX Insect Dust is a ready-to-use residual insecticidal dust
PERMEX Insect Dust will control and prevent infestations of many insect pests found in domestic and industrial premises, such as ants, cockroaches, fleas, silverfish and beetles.

Dust2Dust is a ready to use very fine white particle dust for the control of wasps and other insects in most indoor/outdoor situations.


BV2 is a very effective spray specially formulated for the control of Cockroaches, Ants, Fleas, Silverfish, Carpet Beetles and most other crawling insects including wasps.